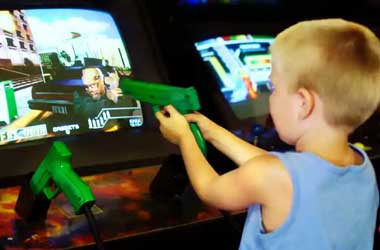 A survey of parents in the United Kingdom (UK) conducted by Online Bingo UK showed that 75% of families visited arcades with their children in 2021.

Result findings established a positive relationship between early exposure to gambling machines and future gambling problems. The study aimed to explore the frequency of British minors visiting arcades, their expenditure, and the games they played.

Over 2,600 British parents were a part of this survey. The majority of them did not object to their children playing on arcade machines like claw grabbers and 2p coin machines. The study reflected that a family spends £25 a year on arcade trips.

While 75% of British parents take their children to the arcades, evidence shows that arcades teem with Category D gambling machines and excessive gambling advertisements. The study expressed its concern that exposing children to such an environment might entail detrimental effects on their future and encourage gambling tendencies.

The report launched into a detailed explanation about how seemingly innocent machines such as 10p slot machines, claw grabbers, and 2p/10p coin push machines come under a category of gambling that is regulated by the UK Gambling Commission (UKGC). These Category D games resemble skill-based games at the outset. On the contrary, they are based solely on luck and lure players with hefty awards. Newer machines like the string cutter/key master also comprise these not so amusing frivolities.

The survey findings also established a clear link between how arcade machines ingrain gambling tendencies early on in children. Numerous studies quoted in the survey demonstrate how deceptively harmless arcade machines can stimulate addictive tendencies in adults. Even the flickering lights and addictive sound effects in arcades can induce young children to keep playing until they win. The study protested vehemently against these factors, as they rub off on vulnerable minds the wrong way.

The report also features evidence that arcades are full of direct gambling advertisements and are a part of conditioning impressionable youngsters to develop problematic and addictive gambling tendencies. Exacerbated by the largely ignorant view on the part of parents, arcade owners, and companies, the study deemed such practices as unacceptable.

While the House of Lords and the British Amusement Catering Trade Association (BACTA) have no objection to children playing on real slot machines to protect seaside communities and businesses, Online Bingo UK urged for a tough stance on the issue to address potential harms.